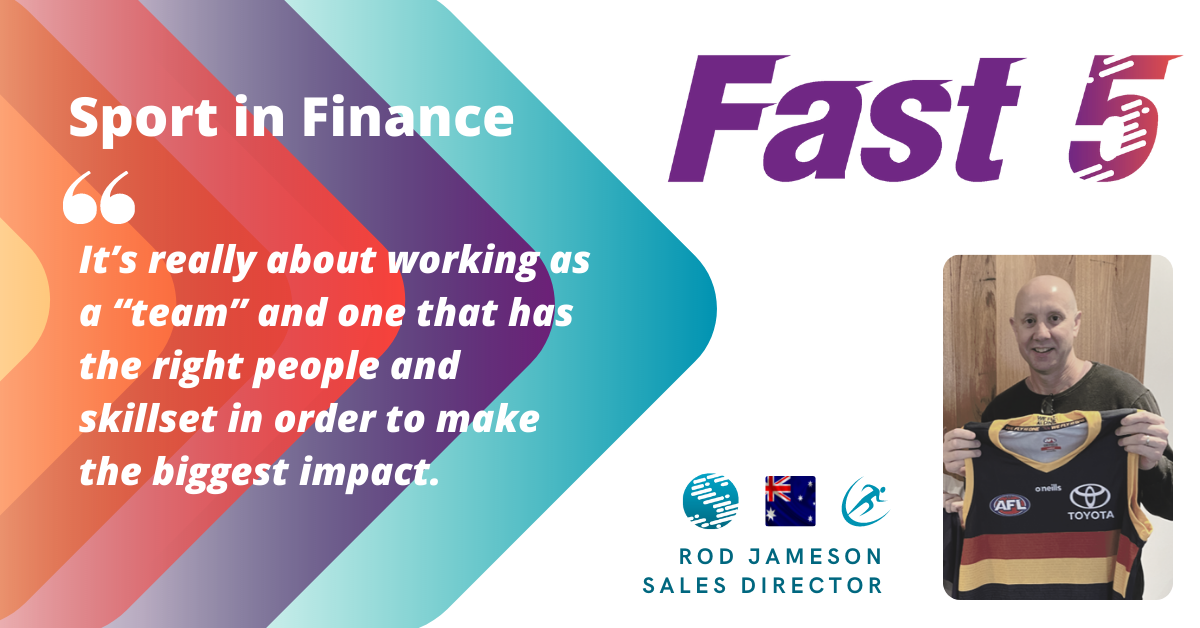 In conjunction with Sandstone’s support of the Fight Cancer Foundation’s Footy Colours Day during September we wanted to take the opportunity to highlight the many professional athletes who go into finance and technology and how sportsmanship plays a role. We chatted to Rod and see what he had to say...

Q1. What is a positive impact you've seen from sportspeople joining the finance and technology industries?

For me and most people with a professional sport background is the commitment and discipline to their role and organisation. Fundamentally it’s really about working as a “team” and one that has the right people and skillset in order to make the biggest impact to contribute to the team’s success and the driver behind this being the company’s success. Additionally, it’s about allowing space for people to strategize and collaboratively so everyone is clear on what the approach is to get the job done.

Q2. What is one sporting attribute do you live by?

There are a few, professionalism, integrity, trust, honesty and reliability however “resilience” underpins these for me – projects and negotiations don’t always go as smoothly as we all want and there’s always an obstacle to overcome so you need to be resilient to work through.

Q3. As a previous (professional) AFL player for 10 years for the Adelaide Crows what drew you to a career in Finance?

Football has always been a fundamental part of my life right from playing at a young age and its allowed me to develop strong values and principles, and opportunities which has helped to carve out a career in advertising and then later pivoting into finance. After playing between 1989-1999  and taking a break there was an opportunity to learn the craft of a Finance Broker into Commercial Banking, Premium & Private Banking which led to becoming an Ambassador for a Tier 1 bank’s Sport & Entertainment segment.

Having been in the sports industry for a decade it was a great opportunity for me to help and support individuals and groups in this segment to enable them to manage and make informed financial decisions to impact their financial wellbeing positively. The sport has never left me and I’ve never left it behind and 21 years later I’m proudly still calling AFL and SANFL games for ABC radio.

Q4. What financial or technology advancement have you been most impressed by over the past 2-3 years?

In these unprecedented times of COVID, all financial organisations and Banks regardless of size are reliant on technology so it has to work effectively. I’ve particularly been impressed with the rapid adoption of AI / ML technology. It’s impact on improving the home loan process to create better customer experiences has been huge.

Working with Sandstone’s customers their digital transformation programs I get to see first -hand how technology can accelerate and streamline processes to create better efficiencies and deliver real value back to customers and their end-users.

Q5.You’re showing off your footy guernsey - can you explain why?

I’m very proud to show the Adelaide Football Club guernsey. I entered the AFL competition in 1991 and it was a proud moment in my career. And today it also reflects the support for the Footy Colours Day charity Sandstone Technology are sponsoring for the month of September, in an effort to help raise much-needed funds to support all children living with cancer and keep up their schooling through a challenging time.

Rod Jameson, has over 30+ years of experience in sales and advertising, banking, technology and finance industries and helping customers to implement digital transformation programs.

During his time as a professional football player he played 153 games for the Australian Football League’s (AFL) Adelaide Crows between 1991 – 1999, and was part of the premiership winning team in 1997. He became a Director of the Adelaide Football Club in 2015 (a position he still holds to this day), is part of their Football Strategy Committee and Hall of Fame Committee as well. He regularly calls the AFL games for ABC Radio and is a Life Member of the Adelaide Football Club.