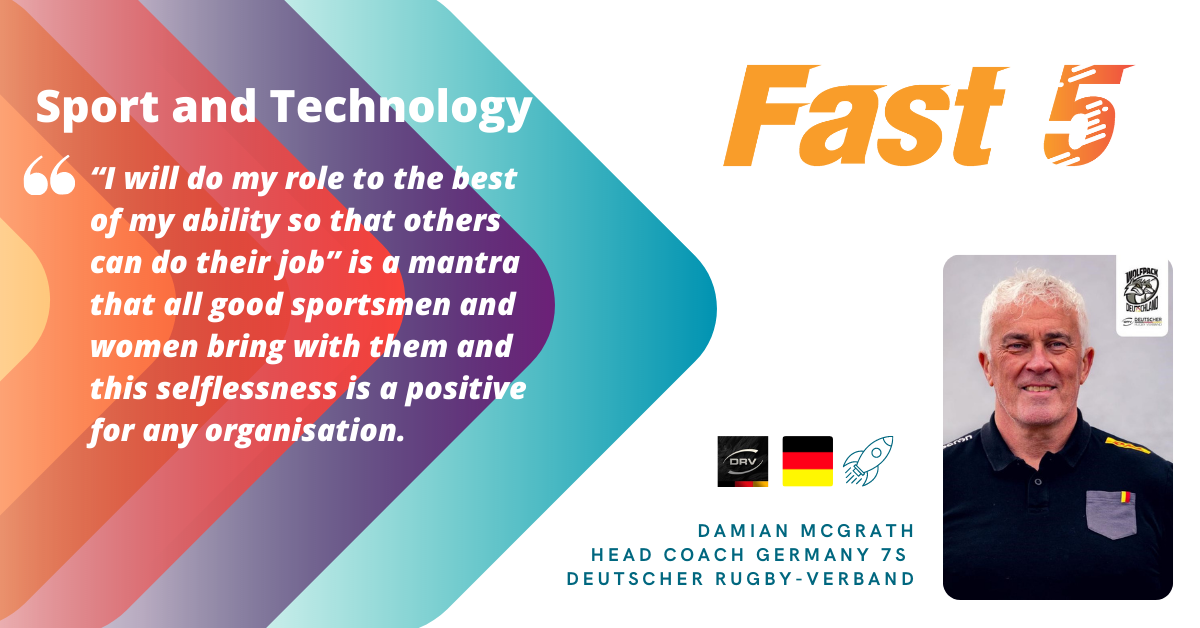 In conjunction with Sandstone’s support of the Fight Cancer Foundation’s Footy Colours Day during September we wanted to take the opportunity to highlight the many professional athletes and coaches embrace the everchanging technologies who go into finance and technology and how sportsmanship plays a role. We chatted to Damian and see what he had to say...

Sports people in the main function as part of a team and the successful ones understand that everyone’s contribution is vital no matter how small and insignificant it may seem. I often talk of how the phrase “There is no ‘I’ in team” is so badly used by leaders and managers. I prefer “I will do whatever it takes to make the group successful” or “I will do my role to the best of my ability so that others can do their job. These mantras are often brought by successful sportsmen and women and this quality is a positive for any organisation.

Q2. What one sporting attribute do you live by?

The importance of “Valuing” people. I heavily focus on letting everyone know they are important and that I value their contribution. Everyone wants to feel wanted and that their work both seen, and unseen is recognised. Sometimes it’s just remembering to say well done or just, thank you!

Q3. As Head Coach Germany Rugby Sevens and an impressive coaching career spanning almost 30 years behind you, what qualities do you feel are key to create a high performing, successful team?

This is the ‘billion dollar’ question and is so difficult to answer in a few words. Bookshops are crammed full of books telling you how it should be done. In my experience it is simply about connecting with people. All good leaders in my opinion are great salesmen, they have the ability to sell a dream and then paint a picture of how it can be achieved. Get that part right and people will see the value in investing their time and energy in your approach and will almost certainly drive the standards higher.

Q4. COVID-19 interrupted sporting events across the world. Did you use technology to keep your team motivated during this period of restricted travel?

Technology is so useful and over the past 18 months it has been a Godsend! Zoom and Google teams make connecting as an organisation or as individuals so easy. I am lucky to have a team of analysts who can extrapolate data, using specific programmes, from our training and games. I can then contrast our performances against our agreed KPIs. We use other technologies to edit training and games which allows me to feed back to individual players and large groups. A modern smartphone can be just as useful for recording sessions and there are a multitude of free Apps that are very useful even if you are restricted by budget. I have, to my surprise, become accomplished on ‘I-Movies’ recently, making small motivational videos to keep everyone’s spirits high and maintain focus on our goals.

Q5. You were invited to speak at the London 2012 Olympics. Can you tell us more about this?

It was a great honour to be asked to speak at London 2012 alongside some very famous names from the world of sport. I was asked to speak around the importance of detail in performance. I often use a quote in my work: -

I spend a lot of time coaching the fundamentals of playing rugby (catching and passing etc) because so often in matches or under pressure the ability to do the simple things very well is the difference between success and failure. No matter how experienced or skilled individuals are it pays to keep the basic skills sharp and consistently high.

Damian played professional Rugby League at Batley RLFC before embarking on a successful coaching career which has encompassed both codes of rugby at club and international level. He joined the Leeds Rhinos and lead the team to two Challenge Cup Finals and an appearance in the inaugural Super League Grand Final.

Damian has coached at international level 7s for many years, including with England, Samoa, Canada and more recently Germany where he holds position as Head Coach. He has a track record to producing high performing teams and often works with corporate organisations to share his experience and skills. You can find out more about Damian’s extensive career in a recent podcast with The Rugby Hive.